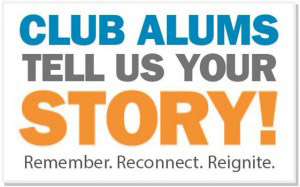 Learn About Our Alumni

Times have changed in many ways, but our commitment to our kids has remained as Boys & Girls Club’s are found nationwide, serving over 4 million children. What began as the Evansville Boys Club has transpired into a home away from home for all kids in our community. For 60 years the Boys & Girls Club has taught critical life lessons, giving kids the tools to succeed academically, personally and professionally beyond their years at the Club.

We want to hear from our Club Alumni! Everyone has a story to tell, what’s yours?

“Growing up in a single parent household it wasn’t uncommon for my mother to be working when I got home from school. Being a shy kid, I didn’t have many friends so it wasn’t uncommon for me to get off the bus from school and just lay round watching television most evenings. I don’t remember how I originally heard about the Club but I do remember my first visit. After signing in at the front desk I was told that the room for kids my age was located at the top of the steps. As I approached the steps there was a man at the bottom that introduced himself to me then walked me up to where I was supposed to be. The man was Bob Rooney and he was the Executive Director at the time. He introduced me to the staff member for my area who then introduced me to several of the other members. From the first visit I became a Club kid and if they were open, I was there. Over the years I did a lot of things at the Club that I would have never done if I had not become a member. Many are memories that I still think about today as the most enjoyable of my childhood.

We would sometimes over the summer go on camping trips so I went water skiing at Kentucky Lake, white-water rafting, and to amusement parks. The thing I remember most though is Bob Rooney always being at the bottom of the stairs when the doors opened. He would always shake my hand then walk up the stairs with me asking me all about how school was for me that day. I wasn’t the best student but he always told me I could do anything that I put my mind to.

As I became an older teenager and began working I slowly started going to the Club less often until I eventually stopped going completely. About 20 years later my employer was wanting to take part in the United Way Day of Caring event and provided us a list of organizations we could go to and volunteer. I obviously chose the Club because I wanted to see how much it had changed. It was very overwhelming for me when I walked back in the doors because it just reminded me so much of my childhood. It also made me wonder if the reason I decided to go to college was due to the confidence I gained as a member and the encouragement I got from Bob Rooney. It isn’t something you really think about as a teenager but it sure seemed obvious to me as an adult. Unfortunately I found out that Bob passed away a few years prior so I wasn’t able to tell him the affect he had on my life. I did decide though that I wanted to give back in some way so I contacted the Club to see in what other ways I could volunteer.

I’ve now been a volunteer for over 10 years and feel that same sense of belonging to a family that I felt when I was younger. In my opinion, there is not a better organization that I person could volunteer with that allows you to see on a daily basis the changes you are making in kids’ lives. If I were going to give advice to current Club members it would be the same advice I got from Bob Rooney. There will be plenty of people in life that will tell you what you can’t do, but if you put your mind to it you can prove them all wrong and be whatever you want to be in life”.

Dave B. – Board Member, Vectren employee, volunteer and advocate

“I consider myself truly blessed to have been associated with the Club for 44 years as a volunteer and now Life Board member. I have been a Board member with numerous philanthropic and professional organizations, but I treasure my time with the Club most of all. Not only have I found satisfaction contributing modestly of my time, talent and treasury to the Club, I have gained more fulfillment in return from my involvement. To share in the growth and joy of the membership in their achievements and successes is more than a volunteer could hope.

I was also fortunate to witness the self-sacrificing dedication to the Club by Bob Rooney. He was a role model few could emulate. Bob turned down promotions so he could spend hands on time with the kids. His inordinate time and commitment to the membership was unparalleled. Bob’s wife, Rosemary, joined the staff to be with Bob. She became a valued staff member, and was fondly referred to as “the pecan lady”.
My gratifying memories are too numerous to detail. The Club was extremely fortunate to have Ron Ryan quickly fill the vacuum left by Bob. Ron was a gift to the Club, because of his needed leadership and business acumen. The Club was in the time and place where it needed a dynamic and resourceful individual to guide it to its next and higher level. Ron Ryan was and is that individual.

This missive would not be complete without noting the long-tenured, stalwart and loyal commitment of Tonya Staup. I have experienced more rewarding moments than I have given with my affiliation with the Boys & Girls Club of Evansville”.